This Saturday (September 20th 2014) is the tenth annual Software Freedom Day. As a group of free software users, we thought this would be a good opportunity to take stock of what the FLOSS world looks like from our perspective, and celebrate the things we like about it.

As Linux users, we’re already users of free software by definition however we all use other pieces of free and un-free software to varying degrees, so we are a heterogeneous group. To bring together our ideas we used a collaborative text-editing tool called etherpad and are publishing on the wordpress platform. What with the medium being the message and all that, it seems relevant to point out these things. Oh hang on, we just relied on a page on the MediaWiki platform. Now can we talk about the LAMP stack that it sits on? And we haven’t even started yet.

So before we disappear up a dependency tree of what we have to mention, let’s just make the point that it is (as we are) everywhere and you don’t have to be a card-carrying member of anything in order to rely on free technology and free culture more generally. Now let’s have a run through some of our favourites.

Everyone has their own preference, but worthy of special mention for both its free ideological purity, and for being the mother of so many other distro’s, is Debian. Having started in 1993 it has since spawned a large number of sub-projects as well as forking into new distros the best know of which is Ubuntu. Some of us feel that Ubuntu has somewhat ‘lost its way’ since it’s recent emphasis on touchscreen interfaces and sending all of your search queries to a certain tax-avoiding vectoralist corporation. Boo-buntu, boo, we say. Try Mint if you want easy.

Other more specialised Debian derivatives include AVLinux, a pre-configured media production workstation, of which Mark reflects:

“I spent years – happy years –  trying to make music with GNU/Linux before. Sometimes it had worked, sometimes it hadn’t. Basically it was just a bit too hard for me at the time, or to look at it another way, tinkering with the machinery was more interesting than my musical ideas. But when I discovered AVLinux, all  of those excuses evaporated because everything was already configured to produce, from the start.”

In the interests of balance, he adds,

Winning on Every Scale

From immense databases down to chip-level support, FLOSS is a core part of our electronic lives. At one end of that spectrum, Helen is a fan of PostgreSQL:

“… an enterprise-class relational database management system, which gets a lot of commercial developers working on it, is very well documented, has lots of neat features and extensions. The PostGIS extension underpins Open Street Map by providing a scalable means of storing the map data (the points and lines).”

Others are also fans of Open Street Map and it’s dependants, for example cycle streets which adds bike-friendly route calculations. Not only does it take free software, but open data licenses to make these projects possible. These are legal rather than technical innovations, but they are vital for creating a sense of shared, common ownership of a resource, without which people would be less likely to maintain and contribute to it.

Barry is impressed by the way hardware is handled;

“I like Linux’s hardware detection: how things “just work”. I like not having to spend time searching for, or updating, drivers.”

Did you think we were going to say something about desktop apps? OK. Audacity. You can even use it on non-free OSes.

Apart from mapping, there are plenty more educational and informational networked resources. Floss Manuals are books that you can remix in order to create educational materials for specific audiences. Topic-specific resources often have a thriving community around them, for example music production.

All in all it seems that the view from Durham is of a free software ecosystem which supports us as we support it. GNU/Linux is an important part of that ecosystem, but there are lots of other bits too; the tall trees of software; the broad plains of open knowledge; the mingling streams of cultural remix; the deep caves of cypher and harvest of guano within; and all over, the shifting breezes of ontological flux. 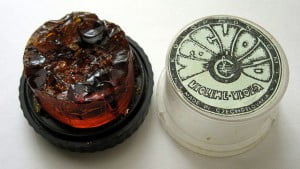 These are not the flux you are looking for

Onto-what? Just this. There used to be ownership, but now being owned is not a singular state. Much of that change is the result of different varieties of licensing. Many of the licenses were inspired by the GNU General Public License. As this gets older it’s easy to forget what a critical innovation it was to consolidate the notion of copyleft, so that whatever we make openly, building on the open work of others, is held in common and shouldn’t be fenced off. The number and varieties of such licenses is a testament to their power to change the way people conceive of intellectual property: ownership hasn’t been abolished, but it’s a highly maleable thing now.